Norway is the undisputed king of fjords, with more than 1,100 of the things dotted along its massive coastline. And if you’re planning a trip, there’s good news: it’s actually quite tricky to visit Norway without seeing at least one of these beautiful geological features for yourself.

You’ll find fjords pretty much wherever you go – from Lindesnes in the very south to Cape Nordkinn in the far North – but a handful of them are extra special, and certainly worth seeking out if you have the time to spare.

To save you lots of legwork and get you straight to the prime photo spots, we’ve rounded up 10 of Norway’s best and most dramatic fjords. This map shows you where they are in relation to big cities like Oslo.

Geirangerfjord is, without doubt, Norway’s most famous fjord. Appearing in the Norwegian movie The Wave and Disney’s Frozen has certainly helped, and Geirangerfjord is among the country’s most visited tourist attractions. Along with Nærøyfjord, some 120km away, it forms part of a Unesco World Heritage Site. Make no mistake, this is classic fjord scenery!

The fjord is located in the district of Møre og Romsdal, two and a half hours from Ålesund. Wherever you stop near the fjord, you’ll be treated to stunning views of steep mountaintops rising quickly out of the water. There are several impressive waterfalls here too, including the jaw-dropping Seven Sisters (which, unbelievably, doesn’t even make the top 40 in the list of the highest Norwegian waterfalls).

All of this stunning scenery is actually under threat. A huge chunk of a nearby mountain called Åknesfjället is slowly breaking free, and is expected to plunge into the fjord in the not-too-distant future, causing a huge tsunami that is likely to wipe out the small village of Geiranger. In 1934, a similar landslide at Tafjorden (around 20km to the northeast), caused a series of vast waves that killed 40 people.

The mountain at Geirangerfjord is monitored closely, though, and experts expect to be able to give plenty of warning so that locals can evacuate. Our advice is to go soon, before the fjord changes forever!

Geirangerfjord is best visited in the summertime. You can get there aboard a cruise ship or by road, approaching via a nerve-wracking series of hairpin turns called Trollstigen.

The Grande Fjord Hotel is just over a mile from the village of Geiranger and has smart, clean rooms, some with balconies overlooking the fjord. Alternatively, Geirangerfjorden Feriesenter offers compact self-catering units with exceptional views.

Sognefjord is the longest fjord in Norway, and also the deepest. Located in the district of Sogn og Fjordane in western Norway, it stretches out in shades of brilliant blue and emerald green for more than 200km, and is more than 1.3km deep in parts.

This is more of a region than an attraction that you’d just go and look at, so it requires a bit more effort to really get to grips with. You can spend time driving between idyllic mountain villages, hiking (try the Jotunheimen National Park at the fjord’s eastern end), or checking out the beautiful wooden stave church in Kaupanger. Jostedalsbreen – mainland Europe’s largest glacier – is worth a stop if you want to try hiking on the ice.

There’s lots to see in the Sognefjord region and journeys can be surprisingly slow. Fortunately there are plenty of places where you can enjoy a cosy overnight stop, usually with the bonus of great views to wake up to.

From Bergen, the Sognefjord region is best reached by car (it takes around four hours to get to Sogndal).

Lavik Fjord Hotell is pricey but some of the modern rooms offer great views. There are also some excellent hiking trails nearby. Botnen Camping has cheaper bunk rooms and simple cottages.

Nærøyfjord is actually a part of Sognefjord. Along with Geirangerfjord (see above) Nærøy makes up part of a World Heritage Site.

The fjord itself is 17 km long but in places it can be extremely narrow – it’s just a couple of hundred metres across at its narrowest point. The fjord is surrounded by mountains that soar more than a kilometre above the waterline, making this one of the most dramatic places to visit in all of western Norway.

Even if it rains (and it probably will) this is a spectacular place to take photos, have a picnic, or simply stare in awe.

Nærøyfjord is a popular stop on tours that start from Oslo and Bergen. You can also get there independently by rental car from Bergen – you’d first need to cover the two-hour drive to Gudvangen and then board the ferry to Flåm, a journey which follows the length of Nærøyfjord and the neighbouring Aurlandsfjord.

This hostel in Flåm is a good cheap place to stay and is a short drive from Nærøyfjord. Lærdal Ferie- og Fritidspark, located around 50km northeast in Lærdalsøyri, has affordable self-catering apartments.

Hardangerfjord is Norway’s second longest fjord. From its mouth, which opens up to the North Sea some 80km south of Bergen, Hardangerfjord stretches inland towards the Hardangervidda National Park.

This region is home to the picturesque village of Odda, situated at the very end of the fjord, which serves as a beautiful base for sightseeing and outdoor activities. More famously, it’s also home to the rock formation called Trolltunga (the ‘troll tongue’) which attracts tens of thousands of hikers every summer and should be on any serious fjord fan’s bucket list. There are some very good guided tours that take in Trolltunga and the fjord.

The drive to Odda takes around four hours from Stavanger, three hours from Bergen or two hours from Haugesund. You can also get there directly by express bus from Oslo, Bergen, and Haugesund.

The rooms at Odda Camping are functional and fairly cheap (by Norwegian standards, anyway). 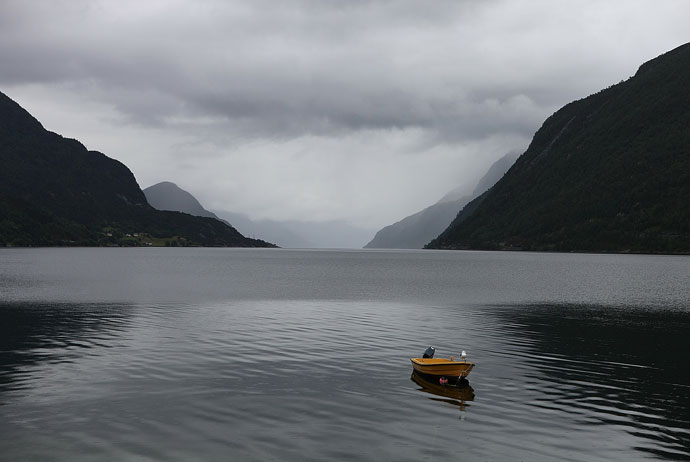 Nordfjord is another gorgeous slice of scenery in the Sogn og Fjordane region of western Norway. Apart from the great views, it’s also near the Jostedalsbreen glacier (see above) and the newly established Loen Skylift at Innvikfjord (a branch of Nordfjord), which brings you to the top of the 1km-high Mt. Hoven in just five minutes.

The village of Nordfjordeid, at the eastern end of the fjord, is the best place to stay near the fjord. It’s a three-hour drive from Ålesund. However, you can also reach Nordfjordeid by express bus from Oslo and Odda, and by express boat from Bergen.

The Scandic Hotel in Nordfjordeid has reasonable rooms, along with a pool and a spa.

Lysefjord is home to the 604m-high Preikestolen, or ‘Pulpit Rock’. This (admittedly rather big) wedge of rock attracts an incredible 300,000 visitors a year –even Tom Cruise has stopped by to film scenes for Mission Impossible 6.

The rock isn’t the only reason for you to check out the area around Lysefjord. The area offers plenty of hiking trails, for example, and is also home to the longest wooden staircase in the world, Flørli 4444 (with, you guessed it, 4444 steps). There’s also Kjerag, a huge boulder that’s suspended high up between two sheer rock faces. The picturesque village of Lysebotn, at the end of the fjord, is a good place to spend a few days.

You can visit both Preikestolen and Lysefjord on this guided hike and canoe trip.

Lysebotn is only reachable by ferry in winter (or, in summer, via 27 hairpin turns on the road called Lysebotnvegen). Lysefjord itself is around an hour from Stavanger by boat. Fjord sightseeing tours are available, and you can jump on a bus tour to the starting point of the Pulpit Rock trail.

Alternatively you can take the car ferry to Lysebotn – from there it’s simple enough to embark on a tour to the Kjerag boulder.

In summer (May–Oct), Lysefjorden Turisthytte offers simple lodging and is in a handy spot for touring the local area.

Up in the Arctic, Trollfjord (yep, trolls again) is one of northern Norway’s best-kept secrets. Located between the Vesterålen and Lofoten islands, Trollfjord is only a 2km-long fjord but its shape, with a narrow channel opening up into a large oval bay, makes it feel even more hidden.

The fjord is also surrounded by steep mountainsides, which seem to spend much of the year in black and white, thanks to the dark colour of the rocks and the thick snow that clings to them. The frigid water in the fjord looks like dark and inky, and you’ll sometimes see eagles circling overhead, adding to the edge-of-the-world feel. The tallest mountain here, Mt Trolltind, reaches 1084m above sea level.

Trollfjord can only be visited by either Hurtigruten cruise or a boat trip from the Lofoten Islands.

This is a wild part of Norway and the only accommodation nearby is this simple hut, run by the Norwegian tourist authority.

Lyngenfjord is another fjord in the north of Norway, located in the Lyngen Alps near Tromsø. At 82km long it’s absolutely huge, and it stretches through a region that’s popular with people looking to see the northern lights.

The high peaks of the Lyngen Alps create a bit of a rain shadow, which means clear skies are more likely here than in many other parts of the country. There’s more on seeing the northern lights in Norway in this guide.

From Tromsø, you can get to the village of Lyngseidet by car or bus (timetables here). 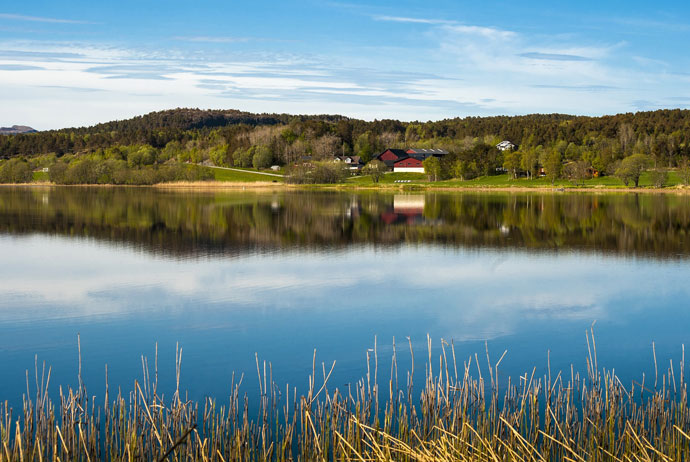 Trondheimsfjord is one of the more accessible fjords in Norway, as it’s situated right by the city of Trondheim. The fjord stretches from the Norwegian Sea all the way to the town of Levanger, around 50km to the northeast.

Why should you visit? Well, there’s the big skies, the birdlife, the rolling countryside, the open expanses of glittering blue water… need we go on?

The fjord runs right past Trondheim so if you’re visiting that city, you’re already by the water. There are several ferries and boat tours (in summer only) that take you out onto the fjord. For example, you can travel to the island of Ytterøy or to visit the former prison island and fortress at Munkholmen.

Trondheim has a few cheap hostels, plus dozens of hotels. Airbnb can work out cheaper, especially if you’re travelling with a few other people. 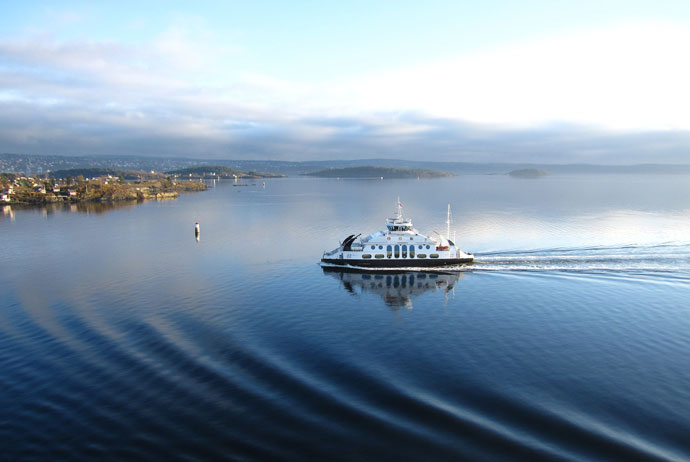 If you’re only in Norway for a couple of days but would like to see at least one fjord, don’t worry! Oslo has got you covered. The Oslofjord might not be as spectacular as the fjords of western Norway but it still offers plenty of nice islands (and beaches!) for a summer visit. It’s also one of the easiest fjords to visit on a guided tour.

Try the fortress island Oscarsborg, the old monastery on the island Hovedøya, or the Bygdøy Peninsular, which has some great museums. There’s more on exploring the Oslofjord in this guide.

Several ferries and boat trips leave the harbour at Aker Brygge daily, or you can travel through the Oslofjord and Skagerrak/Kattegat on one of the ferries connecting Norway with Denmark. There’s more info on touring the Oslofjord on a budget here.

Hotels in Oslo are expensive! Try one of these great hostels if you’d rather avoid paying for a hotel (most offer private rooms).

Don’t forget insurance – even if your trip has already started!

It’s no good visiting Norway’s beautiful fjords if you don’t have adequate travel insurance. Even though travelling in Norway is safe, we strongly recommend getting a decent policy in place for your trip. It really can make a world of difference if you lose your valuables or get involved in an accident. For lots of different reasons, including the fact that they will cover you even if your trip has started, we recommend World Nomads. You can get a quote below.

Map of the best fjords in Norway