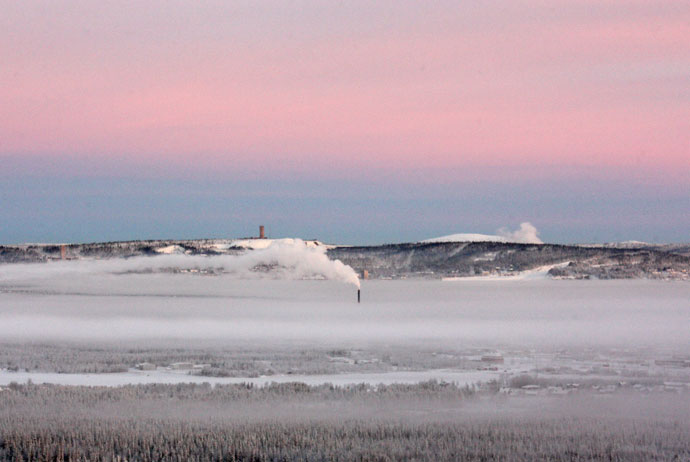 Hard-working Gällivare is one of the few towns of any significant size in the central part of Lapland. It’s a small, often bitterly cold place that nonetheless provides a good base for trips into the surrounding countryside, where it’s possible to go hiking, skiing, fishing, dog sledding, and snowmobiling. The lakes and forests around here are beautiful.

Although tourism has been bringing in a few kronor in recent years, Gällivare is still primarily a mining town. Many of the local people work down the iron-ore mine at Malmberget, a few kilometres from the centre of town.

It’s a vast operation, and second only in size to the mine in Kiruna, some 100km to the north. Like the mine in Kiruna, it’s expanding fast, and (also just like Kiruna) deep excavations are now threatening the stability of nearby homes and public buildings. Over the next couple of decades, many of Malmberget’s buildings will be torn down and rebuilt in Gällivare.

For now, tourists can visit the mine as part of an organised tour. Otherwise, man-made sights in Gällivare are few and far between. There’s a pretty church, a museum, and a small shopping centre that doubles as a meeting place for coffee-drinking locals. Much more appealing for most visitors is the Dundret Ski Resort, spectacularly located on a hill overlooking the town.

Between mid-June and mid-August it’s possible to reach Gällivare on the incredible Inlandsbanan railway line, which snakes through central Sweden. Gällivare is the northernmost stop on the line, making it a natural place to break the journey before heading back down south or continuing up to the very north of Sweden. Even when the Inlandsbanan stops running for the season, it’s easy enough to reach Gällivare using public transport.

There are some fairly typical Swedish supermarkets around town but the restaurant scene in Gällivare is a long way behind northern Sweden’s coastal cities, so options for eating out are fairly limited. There are some good places to stay in Gällivare, however, and prices are generally pretty reasonable.

If you happen to be in town during November, be sure to check out the Santa Winter Games. This bizarre annual event sees wannabes from all around the world competing in porridge-eating contests and reindeer races in a bid to be named Santa of the Year.