Stockholm stretches across fourteen separate islands, which are separated by twisting canals and open waterways. No matter where you go in the city, it seems like you’re never too far from the shoreline.

Because so many locals commute from one island to another, ferries make up an important part of the public transport network. There’s also a thriving boat tour industry, with dozens of colourful boats taking tourists out onto the water to get a different view of the city.

With Lake Mälaren to the west and a vast archipelago to the east, there are loads of different boat trips you can take from Stockholm.

Some take less than an hour and some are much longer, offering you the chance to enjoy a full day of sun, sea and sand. If you do decide to hop on a boat tour from Stockholm, there are a few things to keep in mind. 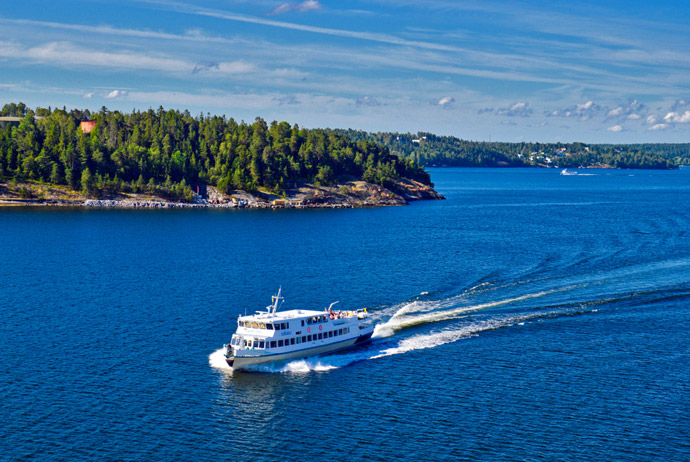 There are so many different boat tours and cruises on offer that you might want to start narrowing down your options early on. The first step is to work out much time you have.

A brief tour of Stockholm’s inner waterways will take less than an hour, while a longer trip to the Stockholm Archipelago will take at least three hours, if not the whole day.

Next, you should think about which direction you want to head in. Do you want to head west towards Lake Mälaren, go east beyond the city limits, or stay nice and central to get a feel for Stockholm’s different neighbourhoods from the water?

Another thing to bear in mind is the content of the tour. If you want to see Stockholm’s highlights from the water, there are dozens of tours that circle around Stockholm’s canals and introduce you to the city the way it was meant to be seen, from the deck of a boat.

On the other hand, if you fancy a day of wandering cute streets, chomping through yummy kanelbullar (cinnamon buns) and drinking in lovely panoramic views, you might want to head to one of the archipelago islands close by, such as Vaxholm or Fjäderholmarna.

Another option, if you’d prefer to delve into Swedish history, is to roam among Viking ruins and 17th-century palaces on a boat tour of Lake Mälaren.

– Wear something warm and waterproof; it can get chilly, even during summer
– Pack sunscreen during the summer (the UV levels can still be high, even in Sweden)
– Consider taking a private tour: there are options for sailing and kayaking
– Bring cash and cards, just in case
– Don’t forget your phone/camera!

Where do the boat tours depart from?

There are harbours all over the place in Stockholm, but if you’re joining a boat tour then the chances are that it will depart from one place in particular: Nybroviken in Norrmalm.

Strömkajen is another popular harbour in Norrmalm. It’s at Södra Blasieholmshamnen 11. Many tours that stay in the city limits, such as the Royal Canal Tour, depart from here.

The departure points are always subject to change, so be sure to check your ticket to see which one your trip is departing from.

Summer (roughly April–September) is high season for boat tours in Stockholm, thanks to the much warmer weather and the fact that the waterways are completely finally free from ice at this time.

However, some cruises and tours (like the Royal Canal Tour, for example) are available much longer, often until mid-December or whenever the water begins to freeze.

Likewise, tours may start earlier in the spring if the weather is nice and warm. Tougher public boats run out to parts of the Stockholm Archipelago all year round (see this guide for more details on some of the islands you can visit with these boats).

And of course, there are atmospheric winter cruises that run through the year, provided there’s no ice.

Where to get tickets

It’s usually cheaper and less hassle to book the ticket yourself. You can buy tickets for all tours online up to one hour prior to departure time.

After that, you can either buy tickets at tourist information centres or Strömma’s ticket offices at Strömkajen, Gustaf Adolfs Torg, Stadshusbron and Nybroplan.

On some boats, such as the ferry to Vaxholm, you can even board without a ticket and buy one onboard.

If you’ve got a Stockholm Pass, a ‘hop-on, hop-off’ boat tour is included in the price of your pass. To find out whether the Stockholm Pass is right for you, check out this handy guide! 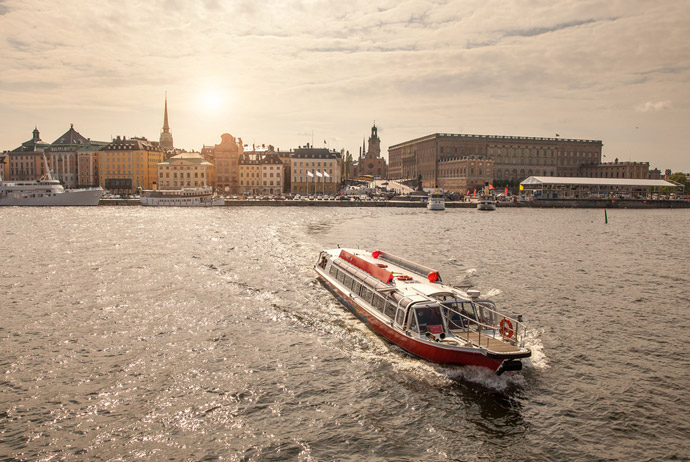 12 of the best boat tours and cruises in Stockholm

Keep things in Stockholm with this sightseeing cruise especially made for tourists. The boat will take you under bridges to the main landmarks (audio-visual tour onboard).

This two-hours and 15-minute cruise will take you from the Baltic Sea to Lake Mälaren, under bridges and to the main landmarks of the Old Town, Södermalm, Stora Essingen, Hammarby Sjöstad and forested Djurgården.

Have less than an hour to spare and just want a sneak peek of Stockholm from the water?

The Royal Canal Tour glides around the peaceful Djurgården canal and introduces you to this historic island’s landscapes with an audio guide in 11 languages. It’s one of the most popular boat tours going.

See Stockholm at your own pace with the unique hop-on hop-off boat tour. Hop off wherever you like: the Royal Palace, the Vasa Museum, the Old Town, Nybroplan, Skeppsholmen, Gröna Lund, Fotografiska and Slussen.

This is a quick way to see all the city’s major highlights, a boon if you’re pressed for time.

If you don’t have a lot of time but still want to see the archipelago, this full-day tour will set you up on a kayak boat. Glide along the water, admire Stockholm from its shores, and when you get peckish, there’s lunch onboard.

Charming Vaxholm is one of the most popular islands in the archipelago, with a picturesque town, narrow alleys, shops, galleries, and the 16th-century Vaxholm citadel.

The journey by boat is just one hour and you can easily spend a whole day exploring Vaxholm town before heading back to Stockholm.

If your goal is not to sightsee, but just to relax and enjoy a fine meal on Stockholm’s gorgeous waterways, go with a dining cruise.

There are brunch, lunch and dinner cruises, along with a special afternoon tea cruise (you can stuff your face with freshly baked scones and lots of tea!).

There’s even a special ‘shrimp boat’, a three-hour sunset tour of the archipelago with all-you-can-eat shrimp included.

It’s just a 30-minute cruise to get there – spend a lazy afternoon and catch the boat home before it gets too dark (which is around 10pm in the summer!).

History aficionados will love Birka, a once-thriving Viking settlement dating back to the 750s. It’s Sweden’s first city and a fascinating Unesco World Heritage Site. You can wander as much as your heart desires among the Viking ruins and the open-air museum, and then sample authentic Viking food made from locally sourced ingredients at the themed Särimner Restaurant.

Another popular destination for cruises to Lake Mälaren is Drottningholm Palace, residence of the Royal Family and a Unesco World Heritage Site.

You can buy a combination ticket that includes both the one-hour boat ride and entrance tickets to the palace grounds.

Its beautiful parks, landscaped gardens, historic theatre and Chinese pavilion are well worth a look if you’ve made it as far as Stockholm. There’s more info on visiting Drottningholm in this guide. 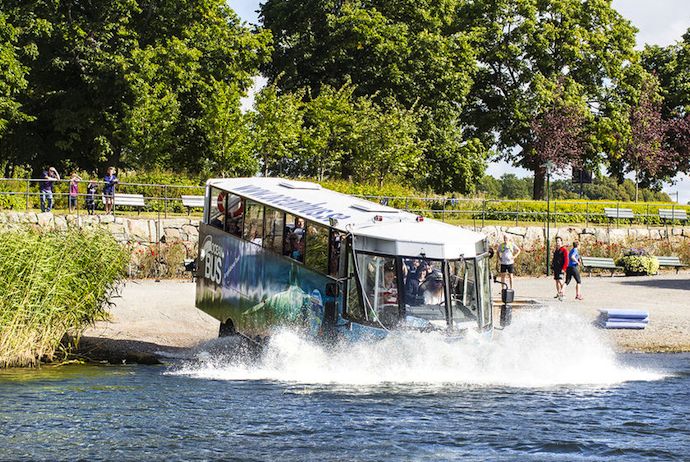 Now, here’s a fun way to see the city by land and water. The amphibious bus tour known as the Ocean Bus starts with a drive through Stockholm’s historic centre before taking to the water and exploring this city’s sights from the sea.

Once in the water, the ten-tonne amphibious bus cruises past the Vasa Museum and the islands of Södermalm and Skeppsholmen, where you get great views of the Royal Palace.

Cruise across the pretty Lake Mälaren on a historic coal-fired steamer the S/S Mariefred, which has been plying the same route from Stockholm to the town of Mariefred for over a hundred years.

Once in Mariefred, you’ll have plenty of time to explore the town’s pretty historic centre and visit the 16th-century Gripsholm Castle.

Just because the weather is bad doesn’t mean you can’t take a boat trip. In fact, seeing the city from the water, its buildings covered in snow with ice on the shores is even more atmospheric than seeing it in summer.

And you don’t need to worry about the cold – reindeer skins are provided to keep you cosy, and warming bowls of traditional Swedish pea soup and hot Glögg (mulled wine) can be bought on board too.