A red cottage in the countryside is one of the most recognisable symbols of Sweden. If you want to learn about where that rust-red colour comes from, you should pay a visit to Falun Mine (Falu Gruva) on the outskirts of Falun, a town in the central province of Dalarna.

This moody Unesco World Heritage Site is packed with history and makes a great place for taking photos. What’s more, it’s open all year round and is (mostly) free to visit.

Falun Mine and the classic red Swedish house

The typical red Swedish house dates back to the 16th century, when Falun Mine began to manufacture the pigment used to produce what is now known as Falun Red (Falu Rödfärg) paint.

The paint contains copper from the mine, along with iron ochre, silica and zinc compounds. In 1764, the mine began producing the paint on an industrial scale.

At first, Falun Red was a symbol of status, used by wealthier citizens on their mansions to mimic red brick buildings in other European countries. But from the nineteenth century, it was also used by farmers.

Today, Falun Red remains popular due to its strong preservative effect on timber – and because it has come to symbolise a romantic image of Swedish country life.

Today, you’ll find red houses, cottages, barns, boats, letterboxes and even dog kennels dotted throughout the Swedish countryside. Though Falun Mine has now stopped production, the colour is still made using a chemical process.

What is Falun Mine and why should you visit?

Falun Mine is a Unesco World Heritage site that produced copper for over a thousand years, from the Viking era until the 1990s. During its heyday in the 17th century, the mine was Sweden’s largest industrial site and produced two thirds of Europe’s copper.

The mine collapsed on Midsummer’s Eve in 1687 (luckily for its hundreds of workers, Swedes leave work early on this day). This wasn’t the end of its story, though, and a century later it would start producing the famous Falun Red paint.

But there’s more to the Falun Mine than some red paint; this site has everything from spectacular photo opportunities, a giant goat statue, Sweden’s tallest bridge and even some dead bodies…

What is there to see and do at the mine? 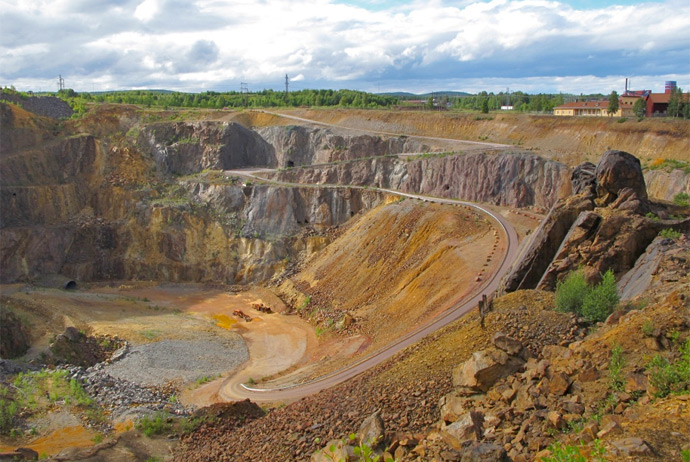 The main attraction is the ‘Great Pit’, a gaping hole that offers a marvellous array of earthy hues. The mine closed in 1992 and the former site is enclosed by a fence to prevent unwanted accidents.

We recommend taking the 1.7km-long trail around the Great Pit. There are information plaques stationed at intervals along the walk, informing visitors about the various parts of the mine and their history.

Falun Red has a strong preservative effect on timber, and apparently it has the same effect on bodies too. In 1719, the corpse of a man known as ‘Fet Mats’ was discovered in the mine. The man seemed to have died recently but in fact, chemical compounds had preserved his body for more than 40 years.

Another story you’ll learn about along the trail is that of the mine’s alleged founder, Kåre the goat. Legend has it that Kåre turned up at his owner’s house one day with his horns covered in red dirt, leading to the discovery of the mine. A giant wooden statue of Kåre stands by one of the mine’s entrances and you can purchase a souvenir of Kåre at the mine shop (it’s the quirky alternative to the famous Dala Horse).

If you’re not afraid of heights, take the opportunity to stand on the Creutz mine shaft, which also happens to be Sweden’s tallest bridge. It’s perfectly safe but there’s a perilous 208m plunge to the bottom.

Once you get halfway around the Great Pit, you’ll get some brilliant pictures of the mine, the Mine Museum and the town of Falun in the distance (we got lucky with the weather but rainbows aren’t always guaranteed).

You can do all of these things for free. If you want a tour of the actual mine it’ll cost you 80 SEK or 210 SEK, depending on whether you want to stay above ground or go below. If you’re heading underground, make sure you’re wearing sturdy shoes and warm clothing. Your tour ticket also includes a visit to the Mine Museum, which has exhibits showcasing the mine’s history.


Getting to the mine

The town of Falun lies northwest of Stockholm and takes around three hours to reach from Sweden’s capital by train or car. The mine itself is about a 20-minute walk from the centre of Falun.

When should I go?

The trail around the Great Pit is accessible to visitors all year round. The Mine Museum is open every day from May–September and has shorter opening hours from October-April. If you’re visiting in July or August, go later in the day when crowds have thinned a little and the afternoon light brings out those lovely earthy tones.

Where to stay near the mine

There are a couple of good places to stay in Falun, including STF Hotel Falun, just over a mile from the mine, and Falu Fängelse, a former prison with rooms and dorms.