Arguably the most famous Dane of all time, Hans Christian Andersen really liked to write. Although he’s best known for penning tales like The Little Mermaid, The Ugly Duckling and The Emperor’s New Clothes, he was also a passionate adventurer, making dozens of trips abroad and writing several travel books.

The author was actually born in Odense, but Copenhagen is where he spent much of his adult life  – and where he was buried after his death in 1875. If you’d like to immerse yourself in his world, this easy, self-guided tour will take you to some of the key Hans Christian Andersen sights in Copenhagen, including his former lodgings, some neat sculptures, and his final resting place in the Danish capital.

The Hans Christian Andersen statue at the City Hall

What better place to start than at Rådhuspladsen, the City Hall square? Here, right alongside HC Andersen Boulevard, one of Copenhagen’s busiest streets, you’ll find a ‘talking’ statue of the writer – just scan the barcode next to the statue with your phone and he’ll start chatting away.

The large bronze statue shows Andersen sitting down with a book, looking over towards the fairytale-like HC Andersen Castle, on the other side of the road. It can get pretty busy here, so you might have to wait your turn to climb onto his knee and have your photo taken.

Andersen’s life is a rags to riches story of its own. Born in 1805 to a poor family in Odense, on the island of Funen, Andersen would go on to become an esteemed writer who rubbed shoulders with the country’s cultural elite. Three years after his shoemaker father died in 1816, 14-year-old Andersen left the nest and moved to Copenhagen to try his luck on the stage at The Royal Danish Theatre, your next stop.

After arriving in Copenhagen, the young Andersen had little success as an aspiring actor, singer and dancer at the Royal Danish Theatre. So he soon turned to writing.

His early plays were turned down by the theatre, but in 1822 Jonas Collin, the head of the theatre, arranged for Andersen to attend grammar school in other parts of Zealand for the next five years. This helped him get a place at university in Copenhagen, where his writing really hit its stride.

The Royal Theatre looks magnificent enough from the outside but if you fancy it you can actually take a tour of the inside, which is home to epic ceiling paintings and glittering chandeliers. See this site for more details.

Just across the road from the theatre, 22-year-old Andersen rented an attic room from 1827 to 1828 in the building that is now the Magasin Du Nord department store. Amazingly, the small room has been restored and is open to the public, although it’s slightly tricky to find and is often closed.

On the third floor of Magasin behind the coffee machine displays you’ll see a picture of the famous former tenant’s distinctive face on the wall. Continue down the hallway and through a meeting room until you see the attic room on your right.

The colourful houses at Nyhavn 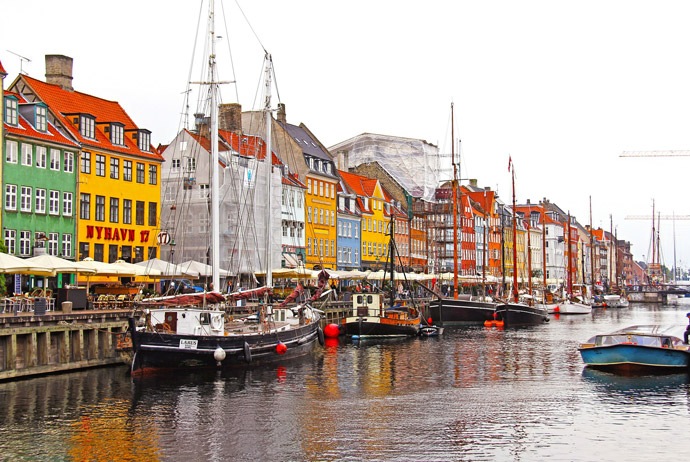 No trip to Copenhagen would be complete without seeing the iconic, brightly-painted houses of Nyhavn. Andersen was also partial to the famous canal-front area, having lived in three different houses there over four decades.

His first fairytales were published while he was living in what is now Nyhavn 20, from 1834 to 1838. It was on the second floor of this building that the young author wrote such classics as The Princess and the Pea and The Tinderbox.

In the early 1870s, Andersen lived next door in what is now Nyhavn 18. Both houses are best viewed from the Nyhavnsbroen bridge, midway along the canal. House number 20 is bright red, while house number 18 is the slightly higher, mustard-coloured building to the right.

His longest lodging stint in Nyhavn was at number 67, where he lived on and off between 1848 and 1865. The bottom floor of the white building is now a café. 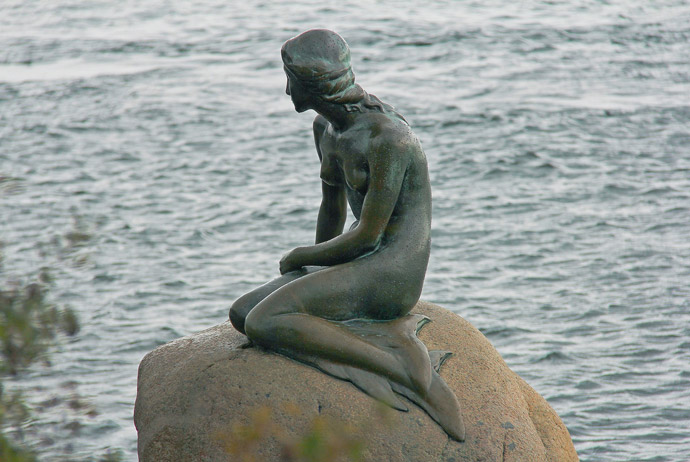 From Nyhavn, walk along the harbour past Amalienborg Palace and the Kastellet fortress until you see a group of people pointing cameras at some rocks on the water’s edge. Rain or shine, tourists flock to see the tiny sculpture of Andersen’s famous fairytale character, which is easily the most photographed statue in Scandinavia.

In 1836, long before Ariel came to life on the silver screen, Andersen wrote of the ill-fated mermaid with the enchanting voice who longs to live on land with a human prince. It hasn’t been an easy 105 years for the bronze statue, which was commissioned by Danish brewer Carl Jacobsen (yep, he of Carlsberg fame).

The little nude mermaid has survived persistent attacks over the decades, with vandals sawing her head off several times, covering her in paint and even removing her from the rock using explosives and chucking her into the harbour. Not quite a fairytale existence!

To get to HC Andersen’s final resting place, make your way across town to the Assistens Cemetery entrance at Kapelvej 4, Nørrebro. Not too far down the main path and off to the left side you’ll find his grave, flanked by a high hedge and surrounded by a low, black fence. The celebrated writer died from liver cancer in 1875, aged 70.

Don’t be surprised to find people having a picnic nearby or going for a stroll. Thousands pass through the historic cemetery’s gates each day to enjoy the green grounds, and it’s actually a pretty nice place for a stroll. It’s open all year from 7am, closing at 7pm during winter (10pm during) summer.

Try a self-guided puzzle walk of the cemetery here.

Prefer to explore Copenhagen with a guide? Check out these awesome guided tours.