With a week or so in Scandinavia you’ll have time to check off some of the main sights in Stockholm and then travel across southern Sweden for a look around Oslo. You could easily fly between the two capitals, but who wants to be hanging around in airports when you can take the train instead?

The train from Stockholm to Oslo is usually fast and comfortable, especially if you manage to get a seat aboard one of the direct intercity services. Tickets are available for as little as 200 SEK each way, wifi is free (up to 200mb per device in standard class) and there’s a buffet car serving hot drinks, beer, wine, and snacks. 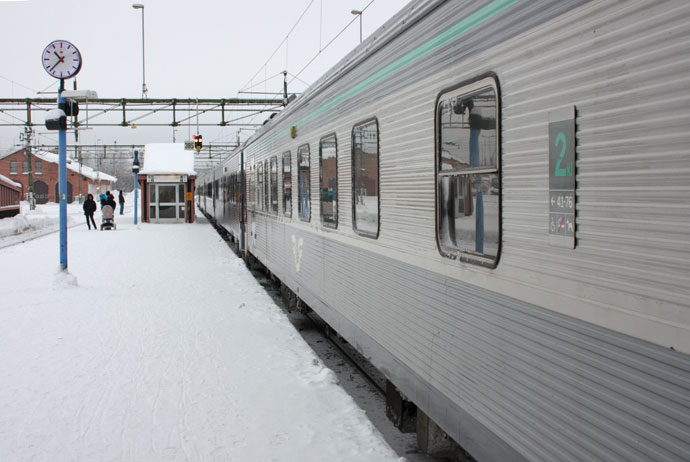 High-speed trains… and not so fast ones

These days, high-speed trains from Stockholm’s main train station (three departures daily) take around four and a half hours to reach Oslo. As they’re direct, you can basically just kick back and wait until you arrive without needing to worry about changing trains.

Sometimes tickets sold for the journey between Stockholm to Oslo involve multiple changes of train, which can put the total journey time up to around seven hours. There’s not much difference in terms of ticket prices, but depending on your plans, you might find that the departure times for these indirect services fit in better with your schedule.

What about a night train?

The last direct train between the two capitals tends to leave Stockholm in the afternoon, arriving in Oslo at around 8.30pm in the evening. There is no night train, but if you really want to travel through the small hours, it is possible. However, given that the total journey time is around 12 hours, and that you’ll need to travel on around five different buses and trains, it’s not a trip we’ll be recommending.

The scenery between Stockholm and Oslo

We’ll admit, this is not one of Scandinavia’s most scenic train journeys. The route from Stockholm to Oslo passes through fairly flat, nondescript countryside, though there are big sections of pine forest along the way, plus plenty of pretty lakes.

How much are tickets?

Prices for these long-distance trains tend to go up and down depending on demand, but the general rule of thumb is that prices start low and rise up until the date of departure. If you’re booking a day or two ahead of departure, you should be able to get a one-way ticket for around 400–500 SEK.

Book a month or two ahead and you might be able to get a ticket for as little as 180–200 SEK – not bad at all for such a long journey.

Your first port of call for direct trains between Stockholm and Oslo should be the ACP Rail website, which sells tickets on behalf of Sweden’s state-owned train operator, SJ. The site lets you find departure times, book online and get an e-ticket sent straight to you.

You can also buy direct with SJ, but you should bear in mind that when you book one of their tickets, you’re essentially just buying the right to be aboard the train. To guarantee that you get one seat for the whole journey, it’s highly recommended that you reserve a place – this generally costs 47 SEK per person and can be added towards the end of the booking process. Seat reservations are included automatically with ACP Rail.

If SJ’s ticket prices seem high on your chosen date and you’re looking to save cash, consider using the new MTR Express service for the first part of the journey. This is the first real competitor to SJ – if you use this service you’ll need to transfer onto an SJ or NSB (Norwegian) train for the final run to Oslo.

Are Interrail and Eurail passes valid?

Interrail and Eurail passes are valid on SJ’s fast trains between Stockholm and Oslo, but you must reserve a seat. This can be tricky to arrange online, so the best option is to call SJ on +46 771 757 575. An alternative is to get yourself down to the SJ desk at Stockholm Centralstation, where staff can help you. Aim to book your place as far in advance as you can.

For now, at least, Interrail and Eurail passes are not valid on MTR Express services.

Some alternatives to taking the train

If you don’t fancy a long train ride, there are a few alternative ways of getting to Oslo:

1) Take a bus from Stockholm to Oslo

Taking the bus between Stockholm and Oslo can be a little slower and less comfortable than the train, but prices are often lower, especially if you’re booking with only a couple of days’ notice.

Flixbus services roll out of Stockholm’s City Terminalen a few times per day, arriving at Oslo’s bus station around eight hours later. Seats come with free wifi and a plug socket, so bring your laptop or phone. There’s a toilet on board. Nettbuss coaches cover the same route a little faster but have near-identical facilities – our advice is to check the prices first and go with whatever’s cheapest.

The fastest way to get from Stockholm to Oslo is to fly, but when you factor in the costs of getting to and from the airport, it’s rarely the cheapest option. Norwegian and SAS both run direct routes from Stockholm Arlanda to Oslo Gardemoen with a flight time of around an hour. It’s also possible to fly from Arlanda to Oslo Torp with NextJet.

It’s a long old drive from Stockholm to Oslo. Allow around seven hours to cover the journey, which basically follows one road (the E18) for more than 500km. If you need somewhere to stop along the way, try the lakeside town of Kristinehamn, which has a lively arts scene.

There’s no ferry service between Stockholm and Oslo.

Need ideas for things to do in Stockholm? Check out our main Stockholm guide.

I will visit family in Uddevalla from Manchester. I would like to visit either Stockholm or Oslo. The fly back to London is early am. What’s my best choice?

There isn’t much between the two in terms of journey times – both take around 4hrs 30min using the fastest train. So it all comes down to which city you’d rather visit. Stockholm would be our choice as there’s more to do and it’s probably the prettier city for photos and sightseeing. Here are 100 free and cheap ideas for Stockholm to get you going!

Is there are a possibility to take auto on trainfrom Stockholm to Norway Oslo or Bergen?
Is there are trains which can carry cars as well?
Thank you
George

We’re not aware of any trains that carry cars… but if your car is working, it’s very easy to drive. The roads are good and well signposted. Is there some other reason that you need to take your car on the train?

A group of 4 ladies in our 50s wish to buy Train FX2000 on 20 June 2016. We wish to reserve our seats. I can’t find any reservation booking button at all. Can you help us? We are in Kuala Lumpur , Malaysia. We can certainly buy the tickets thru our Credit Card now.

Tks so much and appreciate your assistance.

You can book tickets at http://www.SJ.se!