Picture the scene: the lake lapping gently at the reeds, the summer sun sinking slowly towards the horizon, and then you, sat around a long table with friends, tucking into mountains of deliciously fresh crayfish.

After who-knows-how-many shots of fiery snaps, you’re probably feeling merry. Hell, you might even be drunk enough to throw off your paper hat, have a naked sauna and then cool off in the lake.

Welcome to the kräftskiva, or traditional Swedish crayfish party. It’s everything that’s good about the Swedish summertime condensed into a single evening of drinking and feasting. If you like shellfish and booze, you’ll think it’s bloody brilliant.

When is the crayfish season in Sweden?

Once upon a time, the crayfish season in Sweden started on a set date in early August, known in Swedish as the kräftpremiär. This ‘premiere’ harks back to the days when there were strict rules about when crayfish could be fished in Swedish waters, which helped the population recover to healthy levels. When the restrictions were lifted towards the end of summer each year, Swedes let loose and began celebrating with outdoor feasts.

These days, the rules around fishing are more relaxed, but crayfish parties still take place towards the end of summer, when the evenings tend to be mild and the risk of drizzly weather – although always there – seems to fade away.

Despite the fact that there’s still a definite season for parties, you can buy the actual crayfish from Swedish supermarkets and fishmongers all year round.

Whenever possible, a Swedish crayfish party takes place outdoors. Ideally this is at someone’s summerhouse in the countryside, and ideally that house just happens to be nestled beside the sea or some pretty lake. In reality though, anything goes, and you may even be invited to a crayfish party in the middle of Stockholm or Gothenburg. If the rain starts pouring, you’ll probably end up indoors or under a gazebo.

Diners usually squeeze around a long table that’s decorated with bunting and streamers, don cone-shaped party hats, and then start tucking in. The noisy slurping and sucking sounds might take foreign visitors by surprise, but this isn’t considered rude, and is the best way to get all of the flavour out of the crayfish.

There are two main types of crayfish that might end up on the table at a kräftskiva – freshwater crayfish (sötvattenskräftor) and those that come from the sea (havskräftor). Alongside these, it’s likely there will be a big bowl of shell-on prawns (räkor) – help yourself to a handful and peel them over your plate.

Of course, you won’t be expected to fill up on shellfish alone. Every decent crayfish party will also offer basketfuls of fresh bread, dollops of aioli, sprigs of fresh dill, strong cheese from northern Sweden (typically Västerbottensost), and perhaps a cheesy homemade pie, too.


As the meal progresses and your plastic bib gets covered in flecks of crayfish (yes, even the adults wear bibs), you’ll hear shouts of ‘Skål!’ – that’s cheers in Swedish – and be expected to take a gulp from your snaps glass. There’s no need to shot the whole thing if you don’t want to, but in the interests of courtesy, remember to try and make eye contact with everyone around the table before putting the glass to your lips. Cold beer usually fills in the gaps between hard liquor.

Often, all this drinking is accompanied by rowdy snapsvisor – Swedish songs that are sung by everyone around the table, and whose lyrics usually have something to do getting drunk, being drunk, or recovering from a heavy night on the sauce. A good host will usually print out a list of the songs to be sung, so even if you don’t speak Swedish you should be able to mumble along and lift your glass at the right moment. If you’re really keen, you can practice snapsvisor in advance at Stockholm’s Spritmuseum. 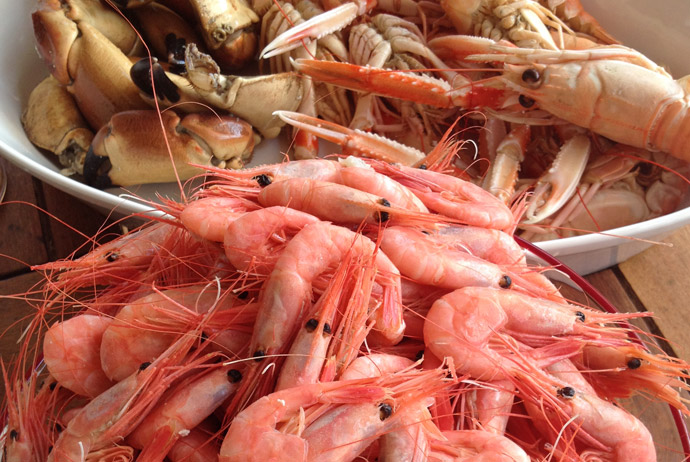 How to eat crayfish

The tails contain the best bit of crayfish meat and are generally pretty easy to get at, even if you’re only using your hands. For other parts of the crayfish, like the claws, you’ll need to fall back on a couple of handy tools, which are usually laid out on the table. One is a simple seafood cracker, designed for crushing the claws. The other is a thin seafood fork that will help you get the meat out of narrow cavities.

Separating the edible stuff from the shells can be quite labour-intensive, so most people tend to shell a couple of crayfish and then take a break to eat. If you really want to make people jealous, you can put in all the hard work first and line up your tails for one delicious feast when everyone else is sucking at their last remaining claws. Whichever approach you choose, keep empty shells on your plate until the meal’s over – some Swedes seem to have a habit of putting them in neat rows, but there’s really no need to bother.

Where to find a crayfish party

The spiritual home of the crayfish party is the west coast, where most of Sweden’s seafood is caught. In reality, by the time August rolls around, there are parties taking place up and down the country. To experience a proper crayfish party you’ll really need to get invited to one by Swedish friends or relatives. The good news is that you can also try Swedish crayfish at restaurants around the country. Here are some recommendations in Sweden’s biggest cities:

If you’re stuck back in your home country, you may be able to join a crayfish party at Ikea – stores around the globe have been known to put on special events.

If you’re visiting the west coast around Gothenburg and don’t mind shelling out (geddit?) a fair bit of cash, you could join a crayfish safari. Värdskap i Väst, based on the island of Smögen, runs three-hour trips out to sea. Any crayfish you catch is boiled on board, ready for you to eat, and there’s a sauna to warm up in at the end of the trip. Crab, oyster and lobster safaris are also available.

Another option, if you’re renting a cottage or flat, is to put together your own crayfish party. All good-sized supermarkets will usually have fresh crayfish and shrimp on their fish counters (it’s sold by weight and is ready to eat), and snaps is available in countless different flavours at all branches of Systembolaget, Sweden’s alcohol monopoly. Cheaper frozen crayfish is also available to buy at most big food shops, but isn’t really as yummy as the fresh stuff and usually takes at least 24 hours to thaw out before you can start eating.

Supermarkets also stock dill, bread, aioli, cheese and the silly paper hats we mentioned earlier, along with reams of bunting, paper tablecloths, bibs and special crayfish party napkins. Stock up on a few beers and you’re all set for a proper Swedish feast. Skål!