A few months back we started hearing rumours of a fantastic little sushi place in Gothenburg, a bit like the restaurant in the documentary Jiro Dreams of Sushi (which is well worth watching, by the way).

The Japanese owner was a little grumpy, people told us, and charged extremely high prices, despite the low-key surroundings. But they also said he took extra special care when it came to selecting his ingredients and preparing his sushi, and would make daily trips to Gothenburg’s fish auction to pick out the very best fish.

As most of the sushi restaurants in Gothenburg are actually Chinese-run, with extremely similar menus, we knew this place was worth a try. 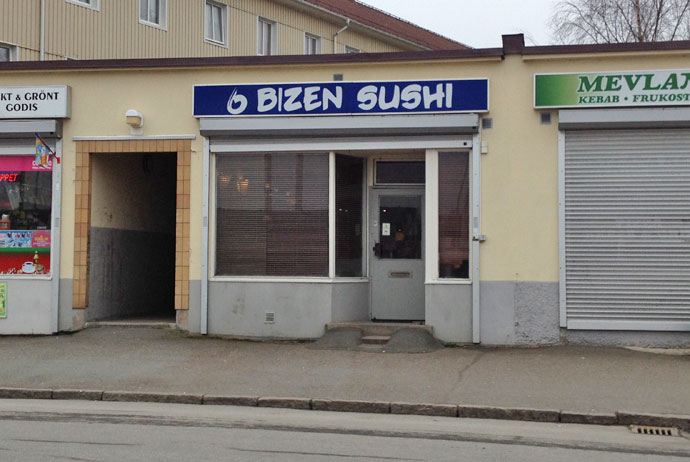 Bizen Sushi is out on the island of Hisingen, an easy tram ride from the city centre, in a partially industrial area that’s dominated by Volvo’s big storehouses and factories.

It doesn’t look much from the outside – more like a little takeaway shop than a sit-down restaurant, with wooden blinds pulled down across the windows. If you walked past without knowing anything about it, you almost certainly wouldn’t bother to go inside.

Even once you push open the door, it still doesn’t look like anything special, though there is an authentically Japanese feel to the place; there are a few wooden stools to perch on around the edge of the restaurant and some calligraphy above the counter, where the sushi chef works his magic.

While dinner here is super-expensive (we were quoted 550 SEK per person), lunches are incredibly good value. We paid 95 SEK for the sushi lunch called Kempis, which came with some amazing salmon, tuna, squid and mackerel, carefully brushed with soy and wasabi and served on a wooden platter.

A word of warning: people have apparently been told off here for asking for extra soy sauce – the idea is that everything is served just right, so there’s no need for extra dipping. There’s also a ban on talking on the phone inside, and taking pictures of the restaurant’s interior. But when you’re eating the best sushi in Gothenburg, who cares?

That overused phrase ‘hidden gem’ was made for places like this.

Cash only. Lunch served until ingredients run out. Call ahead for dinner reservations.

Take tram 6, 5, or 10 to Göteborg Rambergsvallen. Walk under the bridge, continue south past the swimming pool and the restaurant is up ahead.