Given that it’s in the part of Kiruna that’s worst affected by the mine, Scandic Ferrum’s days must surely be numbered.

Which is a real shame, because it’s a cheery, comfortable and family friendly hotel with good rooms at reasonable rates. It’s also handily located right in the middle of the city, just steps from the bus stop where airport coaches pull up.

Some of the fresh-feeling rooms here have views across to the moody mine. We reckon it’s worth asking for one of these as the other rooms make do with boring car park views. Some of the rooms also have baths, so request one if you think you’ll fancy a soak after a cold day outside. 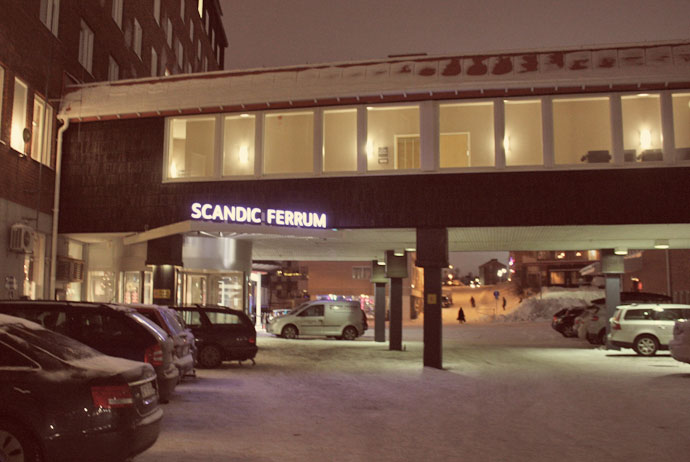 Superior rooms have a bit more space than the standard doubles, plus they come with their own sofas. Otherwise there’s not a huge amount of difference between the two classes – if we had to choose, we’d go for one of the cheaper standard rooms. Suites are also available.

The hotel has good parking and you’ll find a gym and sauna onsite – there’s also a ping-pong table if you need something to keep you busy after dark. On the ground floor there’s a nice modern bar and reception area that’s decorated with reindeer antlers, plus a modern steakhouse restaurant.

Overall, this is a comfortable and reasonably priced hotel (for Lapland, anyway) and one that we hope will stick around for a while longer yet.