Home » Kiruna » Kiruna see and do » Kiruna mine tour

For a deeper understanding of Kiruna’s problems (and we mean much deeper), it’s worth joining a guided tour down into the world’s biggest iron ore mine, which is expanding beneath the city and causing great cracks in the earth.

The mountain called Kiirunavaara has been exploited by miners for more than a century but the vast seam of iron ore running beneath it is still thought to be the biggest on earth. Roughly disk-shaped, it’s more than 80 metres wide and extends down into the ground at a 60-degree angle for around 4km. Up close, you can see the true extent of the excavations – the once cone-shaped peak has practically been ripped in two.

There are several big iron reserves in northern Sweden (Malmberget, the world’s second-biggest iron ore mine, is just outside Gällivare) and the refined material from these mines is exported all around the world, earning huge profits for the state-owned mining company LKAB.

The scale of the mining operation in Kiruna alone is mind-boggling. Some 76,000 tons of ore are pulled out of Kiirunavaara every day. That’s enough material to fill a 12-storey building. When you see the trucks and trains shifting such huge quantities, it’s easy to see why the ground around Kiruna has become unstable – so unstable, in fact, that hundreds of buildings in Kiruna are at risk of toppling into the hole if mining continues apace. 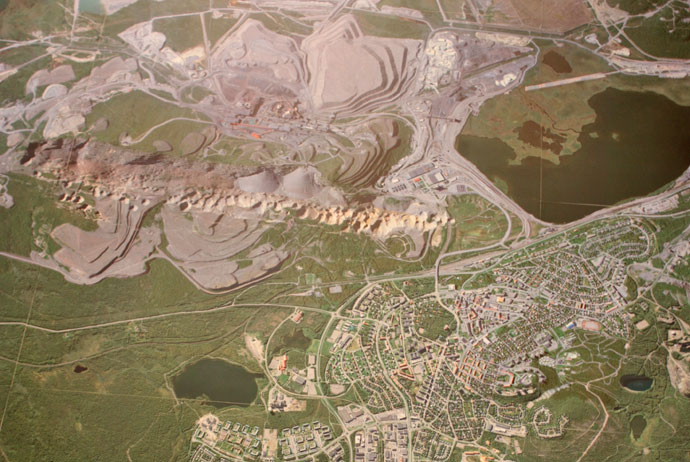 And for better or worse, the mining will continue. The iron here is a major source of income for the Swedish government, and the very existence of Kiruna depends on the jobs created by the mine. What’s more, it’s thought that the current expansion of the mine to a depth of around 1365 metres will ensure a steady supply of iron for the next 20 years or more, securing Kiruna’s immediate future – and paying for the massive city-relocation project in the process.

On a tour of the ‘show mine’, which sits at a relatively tame depth of 540 metres, you’ll learn how the iron ore is extracted and find out how LKAB’s refined iron ‘pellets’ are taken to the seaports at Luleå (on Sweden’s east coast) and Narvik (in Norway), where they make their way out into the wider world.

Tours leave from Folkets Hus in the middle of Kiruna, which also houses the local tourist office – an LKAB bus will come to pick you up and you’ll be provided with a helmet and overalls to wear in the mine. The tours last around two hours and 45 minutes. This being Sweden, you’ll also get the opportunity to fika underground. 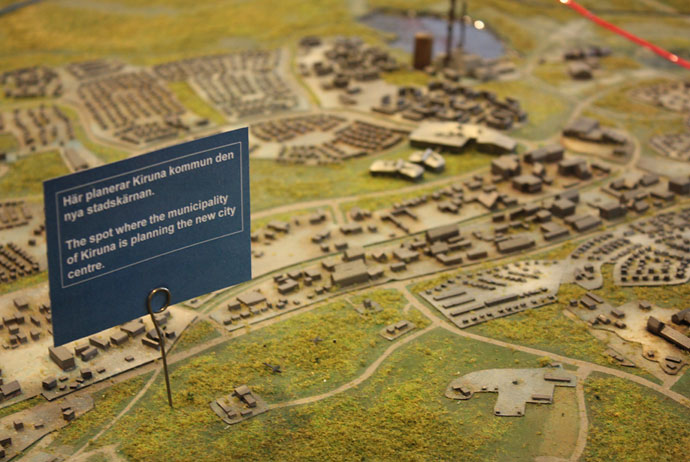 Before you set off on the tour, take time to look around the display inside Folkets Hus, which explains the city-moving project in detail. There’s a scale model of Kiruna showing where the new city centre will be built, and information boards around the room delve into the practicalities of mining on such a large scale. The tone is uniformly positive, as you might expect given that LKAB sponsors the exhibition, but it does help to put the size of the mine (and the problems its causing) into some sort of perspective.

Tours cost 345 SEK per person (245 SEK for students). The mine is warmer than you might expect at around 8c, but it’s still worth wearing warm clothes for the tour. You can book tours at the tourist information desk inside Folkets Hus or book online on the Kiruna Lapland website. Either way, it’s advisable to book a day or two ahead as places on the tour are limited and there’s often a last-minute run on tickets.

The exhibition in Folkets Hus is free to look around.