Close to both the Swedish parliament building and the Royal Palace, Storkyrkan is the most important church in Stockholm – and the city’s de facto cathedral. It’s inside this building, first constructed in 1279 and remodelled several times since, that many of Sweden’s monarchs were crowned and married.

From the outside it’s not especially impressive – it’s a huge rectangular block with orangey-yellow walls held up by stone supports. But its interior is well worth a few minutes of your time: not only for the lofty redbrick columns and extravagant royal pews, but also for some of the art that’s kept within.

At the top end of the nave, just left of the altar, is the church’s pride and joy: an unusual sculpture of St George slaying a mean-looking dragon. Unveiled in 1489, it’s made from an assortment of unusual materials, including oak and antlers. It’s said to symbolise Sten Sture the Elder’s victory over the Danes at the Battle of Brunkeberg, which took place in Stockholm 18 years earlier. 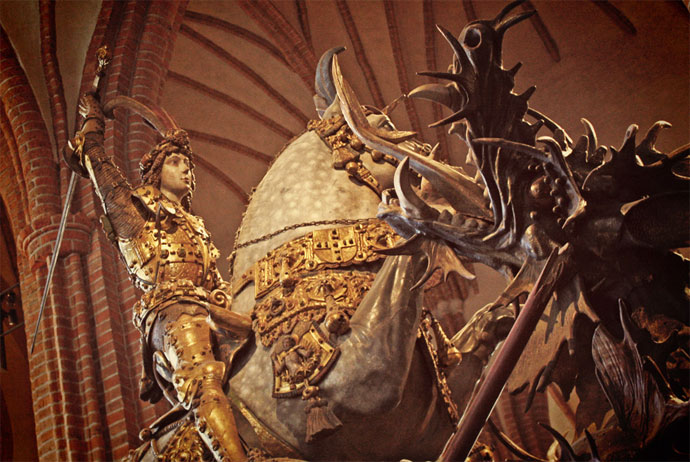 As Sten Sture commissioned the sculpture personally, it’s safe to assume that he saw himself as the saint, slaying the Danish ‘dragon’ and simultaneously rescuing a ‘princess’ (the city of Stockholm itself).

Also worth seeking out is the so-called ‘parhelion painting’, which shows how Stockholm may have looked on the 20th April 1535, when strange sundogs (or parhelions) lit up the morning sky.

Although it’s a copy made 100 years after the original, which is lost, this is still the earliest known painting of Stockholm. And despite the painting’s age, parts of Gamla Stan are still vaguely recognisable today – Storkyrkan and the Royal Palace, in particular.

Getting there
The nearest T-bana station is Gamla Stan. Alternatively you can take bus 2 or 55 to the stop called Slottsbacken.