Denmark’s most iconic statue, The Little Mermaid sits on a rock in the northern part of Copenhagen’s harbour. Weighing in at around 175kg, this bronze sculpture has been been lounging in the harbour for more than a hundred years and, though it might seem surprisingly small at around 1.25 metres tall, it’s still a must-see on any first trip to Copenhagen. 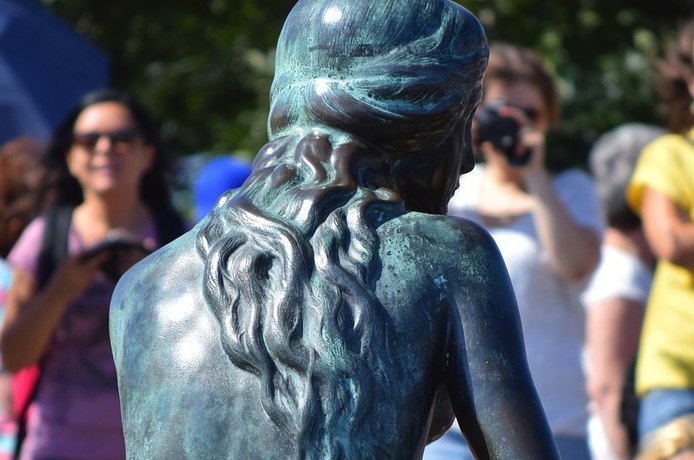 The Little Mermaid is quite… little. It’s definitely worth seeing, but don’t be too disappointed when you get there and discover that this landmark is actually pretty tiny. The statue is in a really nice part of the city though, and there are plenty of other things to do in the area (see below).

When’s the best time to see The Little Mermaid?

The Little Mermaid is totally free to visit. It’s located in a public part of the city, which means it can be seen all day long and all year round.

When’s the best time to go? Well we reckon it’s a good idea to get there as early as possible in the morning, in order to avoid large tourist crowds that descend on the statue. At times there can be a surprising amount of jostling as people try to get the perfect snap for their Instagram.

How to get to the statue

The statue is just off the promenade known as Langelinie. Walking from the city centre is a great option, especially if you luck out with good weather. From the cobbled streets of the lively Nyhavn area, it’s a 20-minute walk along the harbour to The Little Mermaid, near the fortress of Kastellet (The Citadel), just across the water from Refshaleøen.

On the way there you’ll pass The Royal Danish Playhouse and the royal residence of Amalienborg Palace, with excellent views to the city’s contemporary Opera House on the opposite bank.

Alternatively you can blend in with the Danes by renting a bike, or take bus #26 or #27 to the ‘Søndre Frihavn’ stop – from there it’s a short walk down Langelinie to the sculpture.

You can also get on this hop-on hop-off bus which stops at The Little Mermaid.

From Copenhagen Central Station, it’s just three stops by train to Østerport Station, a 15-minute walk around the moats of Kastellet to the statue.

Seeing the statue as part of a tour

Many of the Copenhagen’s classic canal tours take you past the ‘Lady of the Sea’ while exploring the harbour’s highlights. A nicer, less crowded option is to rent your own electric boat or a colourful kayak and paddle your way to the sculpture.

Alternatively, you could join one of the city’s sightseeing bus tours (some of them are included with the Copenhagen Card). These often include a stop near The Little Mermaid. The final option is to wheel your way there with this two-hour Segway tour, which includes a stop at the sculpture along with several other attractions. You can also check out this other one- to two-hour segway tour that stops by the beautiful statue.

What to do near The Little Mermaid statue

The area around The Little Mermaid is dominated by the star-shaped fortress Kastellet which is one of the best preserved of its kind in Northern Europe. Today it’s a popular picnic destination for locals and a great place to take a stroll through Copenhagen’s history.

The nearby Gefion Fountain is topped by a statue of the Norse goddess Gefjun, who is said to have separated the island of Zealand from Sweden. Architecture lovers might want to take a closer look at the Langelinie Pavilion, a minimalistic events venue overlooking the harbour, just a stone’s throw from the Mermaid.

Further along the waterfront at Langelinie Allé, The Little Mermaid has a contemporary ‘sister’, the ‘Genetically Modified Mermaid’ with Picasso-like features, which is part of a larger sculpture group by Danish artist Bjørn Nørgaard. Nearby, the Langelinie Marina is a good place to admire some of the big cruise ships that regularly visit the city.

For something more engaging, you can also check out this Little Mermaid Charming Game and Tour that makes you solve clues to unlock magical stories about Hans Christian Andersen and the Little Mermaid.

History of The Little Mermaid – beer and fairytales

The Little Mermaid’s history combines two of Denmark’s best-known exports – Hans Christian Andersen and Carlsberg beer. It was the son of the founders of the famous Carlsberg brewery that commissioned the original sculpture and gave it to the city of Copenhagen.

The statue was initially inspired by Christian Andersen’s well-known fairytale, first published in 1837, but more precisely by the ballet at Copenhagen’s Royal Theatre and a ballerina called Ellen Price.

The Danish artist Edvard Eriksen used Price’s head as a model for the statue, but the story goes that she wouldn’t model in the nude, so the sculptor’s wife had to stand in for the body, and the two women were merged into one statue.

The Little Mermaid keeps herself surprisingly fit, despite her age – and despite having been beheaded a couple of times, having been blown up and vandalised for various political reasons over the years. Although bound to her rock, the sculpture has gone international on one occasion, when she was removed from her home town harbour and taken to the Danish Pavilion in Shanghai for the Expo 2010.

Map of The Little Mermaid Statue