VIKINGS! For history geeks, one of the big joys of a visit to Sweden is learning all about the fierce folk who once called the area home. But historic sights linked to the Vikings are actually quite difficult to track down in Sweden, and the closest most people get to a Viking-style experience is battling the hoards of shoppers in downtown Stockholm.

Armed with our guide, however, you’ll be able to give the plastic swords and horned helmets a wide berth – and get straight to Sweden’s real-life Viking treasures. And just for fun, we’ll throw in a couple of fun touristy experiences as well.

If you’re into Viking history, check out this half-day tour from Stockholm, which is led by a knowledgable historian and takes you to ancient burial mounds and rune stones! A full-day Viking tour visiting Sweden’s oldest town is also available here.

Tucked away on Björkö, a small island in the middle of Lake Mälaren, the Viking trading post called Birka was once home to around 700 people. Traders came from as far afield as central Europe and the Orient, and a few Swedish kings even took up residence at Hovgården, just across the water.

These days Birka is one of the best Viking sites near Stockholm, and it’s a big hit among day-tripping Swedish families, thanks to the fun guided walks and the neatly reconstructed town centre, which features cute wooden huts that were built using traditional Viking techniques. When you’ve seen the museum, the burial mounds and the old rune stones, there’s a lovely beach that’s great for swimming.

From May–September, boats make the journey to Birka from Stadshusbron in central Stockholm. A return trip with Strömma costs 380 SEK, including admission. 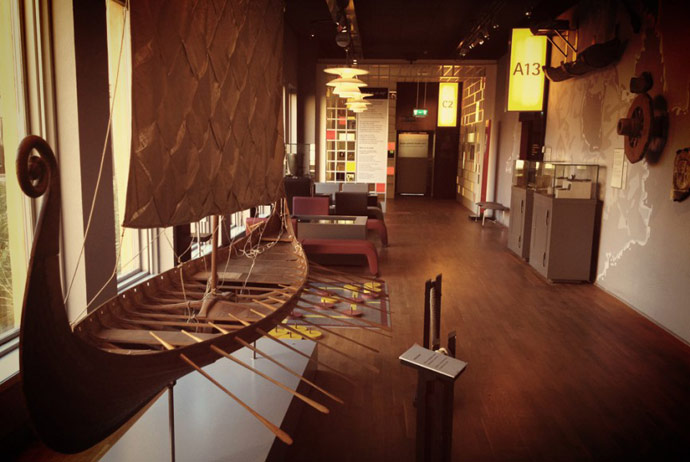 If it’s treasure you’re after, head to Historiska. Stockholm’s best history museum has more than 250 kilos of the stuff hidden away in its vault, including silver earrings from the Viking Age and an early crucifix that was discovered at Birka (see above). Also on show is the world’s biggest-ever hoard of Viking treasure, which weighs in at a handsome 76 kilos.

For more on the ins and outs of Viking life, take a wander through the rest of the galleries. Trust us: it’s not all blood and guts – lots of Vikings led pretty peaceful lives. As a nice bonus, the whole museum is now completely free. While you’re in town, check out our guide to other free things to do in Stockholm.

With a couple of proper historic sights under your belt, you probably feel like drinking beer. FROM A GOBLET.

Well, it can be arranged. Just head to Aifur, the Viking-themed restaurant owned by the Swedish eurodance musician E-type. The staff wear tunics and the menu covers everything from venison to pike-perch, all done with a rustic, Viking-style touch. It’s pricey and touristy. But yeah. The beer comes in goblets.

Traces of Viking activity have been found all around the Uppsala area, and the pre-Viking burial mounds at Gamla Uppsala (around an hour north of Stockholm) are no exception. It’s said that 2000 people were buried here, and archaeologists have discovered traditional Viking ‘boat graves’ alongside much earlier burials. You can learn all about the area’s mysterious discoveries – and some of the gruesome Viking sacrifices – at Gamla Uppsala Museum.

For a few weeks each July (Mon–Fri only), the Viking village near Norrtälje bursts into life, with costumed staff organising games and story-telling sessions among a cluster of reconstructed houses. The open-air museum also has sessions on how to read Viking rune stones. If you fancy visiting the village at other times of the year, you can either pay for a private guide (it’s expensive) or just wander around the site – the gates are left unlocked.

For the full experience of seeing Vikings in Sweden – complete with helmets, swords and scraggly blonde beards – head to this open-air museum. It’s a 30-minute drive from Malmö and has some nice authentic touches: chickens scurry about the place, campfire smoke fills the air, and the setting is unspoilt enough that you might even think you’ve taken a step back to the Viking Age. If you feel the urge, you can even sign up to join the museum’s growing list of serious, modern-day Vikings, who visit Viking markets around Europe and stay in Viking tents. The museum is open from May–September each year.

Bonus! Take a trip to Denmark

The Vikings didn’t worry too much about borders, and you shouldn’t either. From Malmö it’s a quick hop across the bridge to Copenhagen, where you can check out the Viking exhibits at the National Museum. We’ve published a guide on how to make the bridge crossing between Sweden and Denmark. If you have time left over, head to the Viking Ship Museum in Roskilde – the train ride between the two cities takes around 25 minutes.

looks interesting, planning a sweden & denmark trip in January 2018 was dissappointed that Fotevikens will not be opened, can u send me maps on viking
places or dog sleding (IF it is thru forests not open plains) can u provide more details on travel from Stockholm to Copenhagen l will be pushed for time but would like to see what l can lam also interested in drinking beer from a Viking Horn??

Worth reading Articles , but Fotevikens Museum in Halland? I’m quite sure that’s in Skåne.;-)

You are quite right – for some reason we wrote Halland instead of Höllviken. Fixed now!