There are few hotels on earth that generate as much publicity as the Icehotel. Built entirely from frozen water, it’s an artistic masterpiece that wows visitors from around the world for a few months each year before melting back into the Torne River, as if it never existed. 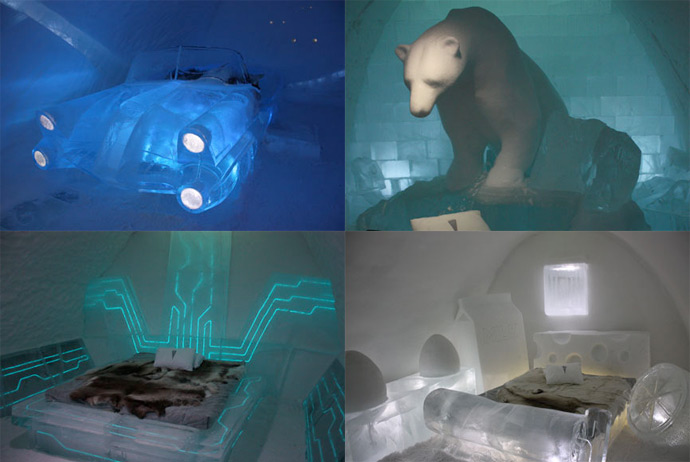 The concept has evolved over the past 25 years or so and these days the Icehotel has around 60 ‘cold’ rooms, some of which feature elaborate ice sculptures. There’s also an ice church, which sees more than 100 couples swapping wedding vows each year, and an ice bar, where you can drink from chunky glasses made from crystal-clear ice.

Each year, artists from around the world are flown in to help design and sculpt the hotel out of blocks of river ice harvested the previous winter. Obviously there are certain logistical challenges associated with a making a hotel out of ice and snow – not least, where the hell do they put the toilets and showers?

Rest assured, these and other useful facilities are kept in the ‘warm’ part of the hotel, which takes the form of permanent, cabin-style accommodation on the same plot of land. In fact, far from being completely isolated, the Icehotel is a lot like regular hotels – it has its own car park, a bus stop, a permanent shop, a reception building and, across the road, a proper restaurant.

Staying at the Icehotel

As rooms within the cold part of the Icehotel are so expensive, many visitors choose to spend one night there and then add another couple of nights in the warm cabins nearby. It’s a sensible decision, as although you’ll be wrapped up warm and insulated from the ice with a reindeer skin, temperatures inside the Icehotel hover at a chilly -5c – fun at first but chilly after a while.

Of course, you can elect to spend just a single night at the Icehotel, or visit on a day trip from Kiruna. Our guide to seeing the Icehotel on the cheap has details of the guided tours that run here each day during the winter season.

If you’re prepared to part with the money you could spend a few nights at the Icehotel and never really need to leave the immediate area. You can arrange to have a dogsled pick you up from the airport, for example, and then spend your days on one of the many guided tours arranged by the Icehotel. You can see the northern lights, ride snowmobiles, join an ice-sculpting class, or feed reindeer at a Sami camp – there’s enough here for four days or so if you really want to try everything.

Alternatively, you could hire a car and set off to explore the area around the Icehotel under your own steam – the roads around Jukkasjärvi are very good but you’ll need to keep an eye out for icy corners (not to mention suicidal reindeer).

The only big negative with the Icehotel is the extraordinarily high prices, which mean that only a lucky few can really afford the full overnight experience. But it is a special place, and one that many people around the world are prepared to pay to visit.

The cheapest rates are available towards the end of the season (April). Avoid Christmas, New Year and Valentine’s Day, when rates soar.