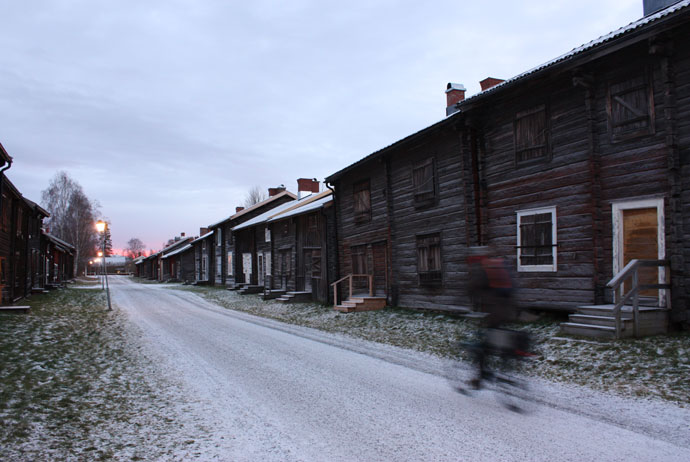 For many travellers, it’s the riverside city of Skellefteå that provides the first glimpse of northern Sweden. Although officially part of the province called Västerbotten, which edges the Gulf of Bothnia, Skellefteå is now marketed as one of the southernmost cities in Swedish Lapland.

Skellefteå’s airport is served by direct flights from Stockholm, making it a handy starting point for anyone hoping to head further north or west into Lapland proper.

The city began to flourish some seven centuries before the arrival of modern tourism. As far back as the early 1300s, attempts were being made to Christianise the area along the Skellefte River, which had long been inhabited by Sami herders, whose animist beliefs were frowned upon by Sweden’s rich and powerful.

Small Christian settlements began to spring up beside the river and by the 16th Century, a traditional church town with more than a hundred wooden cottages had been built beside Skellefteå’s main place of worship. Today this area – known as Bonnstan – is home to 116 wonky wooden cottages from the 1830s (a fire destroyed the entire original settlement).

Away from Bonnstan, Skellefteå feels like a place that’s looking forward, rather than back. It’s one of the few cities in northern Sweden with a growing population, and there is an excellent cultural centre providing space for a surprisingly lively art scene.

Tourists who spend the night in Skellefteå have the choice of some good places to stay, along with some reasonable options for eating and drinking.

With a longer stay in the city, it’s possible to scope out some of the region’s outdoor activities, which include walking, cycling and – in summer – wild swimming in pristine lakes. The coastline around Skellefteå also has some excellent sandy beaches. Frozen solid for much of the year, they warm up nicely in the height of summer.