Although it’s high above the Arctic Circle and hundreds of kilometres from the nearest city of any size, Kiruna is surprisingly easy to reach by bus, train and plane. Note that as the city centre is in the process of being moved, the options for getting to Kiruna are subject to change – we’ll keep track of developments and post updates here as and when things get moved around.

The quickest way to get to Kiruna from southern Sweden is to fly.

Flights from Stockholm to Kiruna

Kiruna Airport, located just 8km southeast of town, is served by direct flights from Stockholm Arlanda. Prices tend to be extremely high, however – 2,300 SEK for a one-way ticket is not unheard of, though if you book in advance you may be able to score a ticket for less than 700 SEK. There are two main players on this route: Norwegian and SAS; in our experience, Norwegian is almost always cheaper.

You can hire cars at Kiruna’s airport – Europcar, Avis, Hertz and Sixt all have a base there.

To and from Kiruna airport

Getting from Kiruna Airport to the city centre is easy enough. The airport bus (flygbuss) operated by Hörvalls Buss leaves from just outside the terminal building around 30 minutes after planes touch down. If your plane is held up and you’re late arriving into Kiruna, don’t worry – the bus should delay its arrival to match yours.

Tickets costs 100 SEK (50 SEK for under 16s) and the bus takes around 15 minutes to reach Folkets Hus, right in the middle of Kiruna. Heading in the opposite direction, the bus leaves from outside Folkets Hus roughly two hours before the plane’s scheduled departure time.

Kiruna’s handsome, brick-built train station is one of the closest buildings to the mine, which means that its fate was sealed long ago, and it’s already been put out of use.

The new (temporary) train station is now located around 1.5km northwest of the centre and is expected to be in use until at least 2017.

The best way to get to and from the station is to walk or take the free shuttle bus that’s timed to meet train arrivals. It runs to the bus station in the middle of town. Taxis are available but the prices are laughably high – around 180 SEK for a trip into the centre.

Train from Stockholm to Kiruna

Night trains (one or two daily) run from Stockholm to Kiruna, taking around 16 hours to snake north through the forests. These trains stop to pick up passengers at Gävle, Sundsvall, Umeå and Gällivare, among other places, before reaching Kiruna.

Rates for the train from Stockholm to Kiruna are best if you book a long way in advance – see our guide to travelling around Sweden on a budget for more details. Note that some services from Stockholm require a change of trains at Boden.

From Kiruna, trains run west to Abisko Östra, Abisko Turiststation and Riksgränsen, before crossing the Norwegian border and coming to a stop at the town of Narvik. 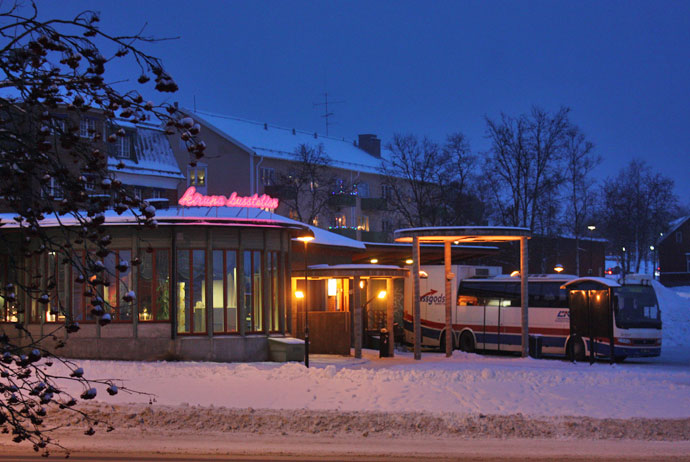 For the time being, local and long-distance buses run by Länstrafiken Norrbotten stop at the bus station, just across the road from the City Hall. There are regular services from here to destinations such as Luleå, Gällivare, Abisko and Narvik – in heavy snow (and in case of avalanches), buses are more reliable than the train. Free shuttle buses to and from the temporary train station (see above) also stop here.

Bus from Kiruna to the Icehotel

To get to the Icehotel from Kiruna, head to Kiruna’s bus station (the location is marked on the map above) and take a number 501 bus to Jukkasjärvi. There are around six departures per day from Mon–Fri. The journey takes around 30 minutes; buses stop right outside the Icehotel. The last bus back from the Icehotel to Kiruna departs at around 6.15pm. If you get stuck, local firm Taxi Kiruna can help, but the fares are high.