Jokkmokk’s relative isolation means that it can take time to get to, but there are reliable connections by train and bus. If you’re driving you’ll find that the roads to and from Jokkmokk are excellent, though reindeer seem to enjoy bounding out in front of cars – take it slowly, especially in winter.

The most enjoyable option for getting to Jokkmokk is to take the train. Unfortunately Jokkmokk’s station is only in operation during the summertime, when the spectacular Inlandsbanan rail line opens up for business.

The Inlandsbanan runs through the middle of Sweden like a spine, from Kristinehamn all the way north to Gällivare.

From mid-June to mid-August, northbound trains roll into Jokkmokk once every evening (at roughly 7.30pm), stopping briefly before travelling on to Gällivare. Southbound trains depart Jokkmokk early in the morning (at around 9.15am), crossing the Arctic Circle after 15 minutes or so.

The train station is on the northern edge of Jokkmokk, a short walk from the town centre and most accommodation options.

If you’re determined to get to Jokkmokk by train during the winter, the only option is to take a regular train from Kiruna, Gällivare or Luleå to Murjek, a tiny village 60km east of Jokkmokk. From Murjek’s train station, bus #43 leaves for Jokkmokk (4 daily from Mon–Fri and 1 per day on Sat and Sun). The bus ride takes around an hour.

A slightly slower but more reliable option is to take the bus the entire way, as explained below. 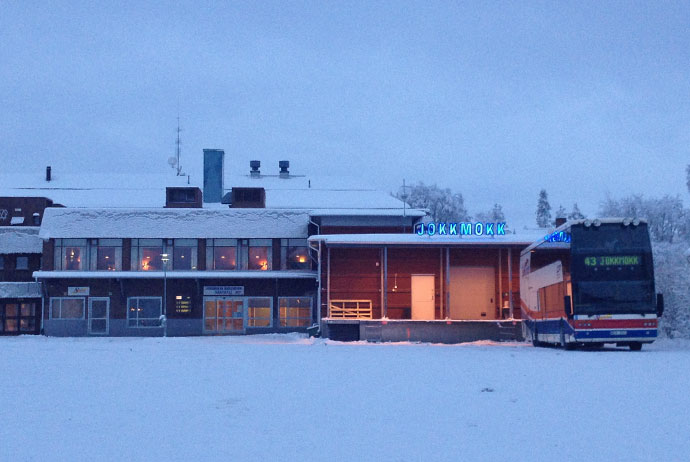 The buses run by Länstrafiken Norrbotten make it easy to get to and from Jokkmokk. There are direct services from Gällivare (1hr 20min), Luleå (2hr 30min), Östersund (9hr 30min) and Piteå (3hr 30min).

If you’re coming from Kiruna, you’ll need to change at Luleå, or take the train to Murjek (see above) and then complete your journey by bus.

All of the services mentioned above pull in at Jokkmokk’s bus station, which is just off Porjusvägen, a quick walk from both the train station and the local tourist office.

Two roads converge in Luleå – the E45, which stretches north-south through the middle of Sweden, and Riksväg 97, which runs east to Boden, Luleå and the Gulf of Bothnia. Both are good, scenic runs, but services along the way are few and far between. Fill up before you set off.