Gällivare isn’t known for its great restaurants, so it’s a good idea to adjust your expectations accordingly. That said, there are a couple of reasonable places to eat dotted around town. There’s also a supermarket selling all the ingredients you need to make your own meals – handy if you’re staying somewhere with its own kitchen and want to keep costs down. 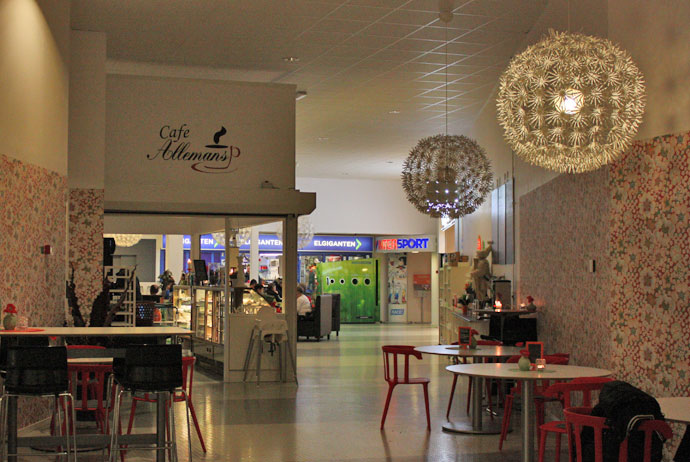 The most obvious place to head when you’re hungry is Storgatan, Gällivare’s main street. At number nine you’ll find Manuella, which is ever so slightly smarter than your typical Swedish pizza joint. It does decent wraps and kebabs for around 80 SEK each.

Further east along the same street at number 21, Nittaya Thai serves up a mix of Thai and Chinese dishes, from green curries with coconut milk to Sichuan-style beef. Prices are quite high for this kind of food by usual Swedish standards but, hey, you’re eating Asian food inside the Arctic Circle.

For daytime eats and tasty fika, head inside the big shopping mall in the middle of Gällivare (it’s called Norrskens Gallerian). Café Allemans, just outside the electrical shop called Elgiganten, has a good selection of Swedish cakes and pastries, and is a popular spot for locals looking to escape the cold weather outside.

Beers and burgers are the main attraction at O’Leary’s on Per Högströmsgatan, a sports bar and restaurant that’s part of a nationwide chain. There are rooms in the attached hotel, but as they’re so worn out and expensive, it’s worth trying to get a bed at one of the town’s other hotels instead.

If you don’t mind paying extra for a classier culinary experience, try Glada Kocken, a couple of kilometres south of town on the road to Dundret Ski Resort. Once there, you can try regional specialities like reindeer and Arctic char (mains 200–350 SEK) in smart surroundings. Lunches are a fair bit cheaper. Glada Kocken is a long walk from Gällivare itself so if you’re without a car (or fancy having a drink), you might want to take a taxi; try Gällivare Taxi on +46 970 100 00.

Finally, for fruit, bread, milk and other supplies for making your own meals, your best bet is the branch of Coop Konsum inside the central shopping mall.

Map of places to eat in Gällivare