Home » Destinations » Swedish Lapland and the north » Luleå » Getting to Luleå

Luleå is one of northern Sweden’s big meeting points and is therefore fairly easy to reach from other parts of the country, though direct international connections are still quite limited. There’s a good airport close to the centre and the city is well served by trains and buses. If you’re travelling overland through Sweden on your way to the far north of the country, there’s a good chance you’ll be able to break your journey in Luleå.

Most of the planes landing at Luleå’s airport – Kallax – come from elsewhere in Sweden. There are regular services from Luleå to Gothenburg, Stockholm, Umeå, Kiruna and Pajala, right near the Finnish border. There’s also a flight to Luleå from Tromsø in Norway. Otherwise, international services are limited to charter flights covering far-off tourist destinations like Gran Canaria and Phuket.

The airport itself is a small but modern building around 7km southwest of the city centre. There’s easy parking outside and there are car hire desks in the arrivals hall if you need to pick up some wheels. 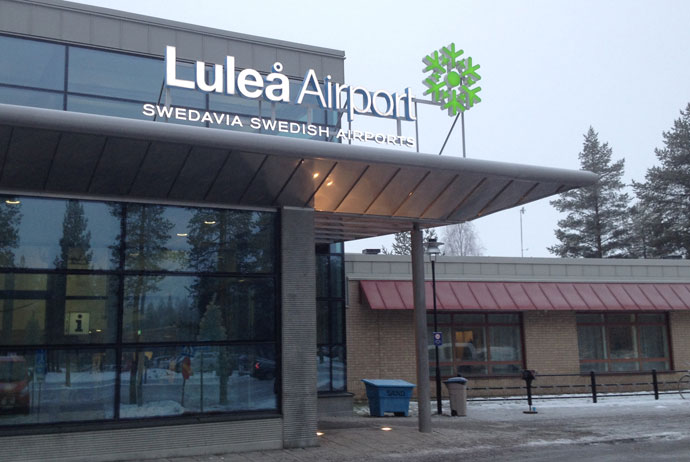 There are several options for getting to Luleå from Luleå Airport. Taxis operated by Flygtaxi wait outside arrivals – if you’ve booked in advance then your name and the number of your car will be shown on a screen inside. A taxi to the centre of town costs around 370 SEK but if you’re travelling alone it should be possible to join up with other travellers (you can arrange a shared taxi through the Flygtaxi website).

A much cheaper alternative is to make use of the airport bus. Tickets are sold at the café just inside the arrivals hall and cost 25 SEK for a one-way journey to Smedjegatan in the city centre. Tickets can also be bought aboard the bus using a credit or debit card. Departures in both directions are roughly every 30 minutes (hourly on Saturdays).

If you think you’ll be making use of local buses while you’re in the area (for a trip to Gammelstads Kyrkstad, for example), then it’s worth asking for a ‘turistkort’. These cost 100 SEK each and give you unlimited use of the local bus network for a total of three days.

Luleå’s train station is a short walk east of the city centre, just off Prästgatan. Long-distance trains arrive here from across the far north of Sweden including Kiruna, Abisko and Gällivare. Heading south, there are trains from Luleå to Umeå, Sundsvall and Stockholm. Most train journeys to Luleå involve a brief stop at Boden, an important junction town some 35km to the northwest.

The bus station is just off the eastern end of Storgatan, Luleå’s main shopping street. It’s used by the long-distance buses that ply Sweden’s east coast from Umeå all the way up to Haparanda on the Finnish border. The station is also served by buses travelling inland to Boden. There’s a warm waiting room where you can pick up the latest timetables – otherwise check the Länstrafiken Norrbotten website.