Beer prices in the Norwegian capital might be eye-wateringly expensive, but Oslo still has a solid selection of local breweries whose homemade beers are definitely worth opening your wallet for. Read on for our list of the stalwarts of the city’s brewery scene, along with recommendations for our favorite craft beers at each place! 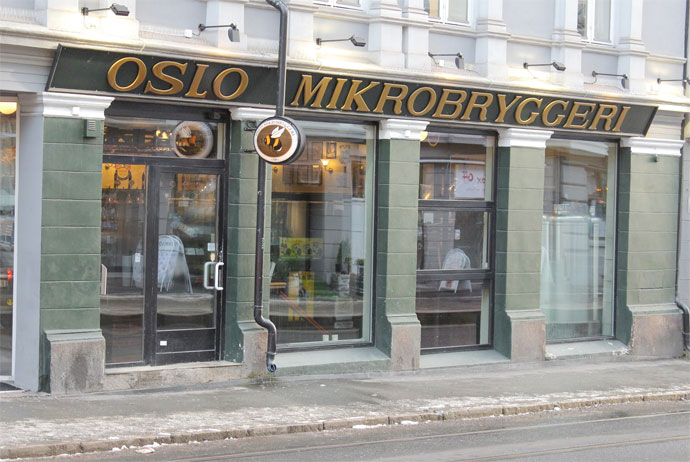 The original and still one of the best, the Oslo Microbrewery was the city’s first modern microbrewery when it opened its doors in 1989, and the ‘bar with the bee’ has remained a mainstay of the city’s brew scene ever since.

The unassuming little bar-brewery, just off the major shopping street of Bogstadveien in Oslo’s west side, is easy to visit while traveling to or from the Vigeland Sculpture Park – and it makes for a perfect pit-stop after a long day of strolling and sightseeing. The microbrewery only serves beers that they’ve brewed onsite, which limits the selection but also guarantees the drinks and experience will be a bit more authentic.

When you’re there, be sure to enquire about the seasonal flavors. In winter, the microbrewery is known for its strong Christmas beers which are reminiscent of traditional gløgg (spiced wine), while the hot summer months are best enjoyed with a light and tangy ‘Twin Peaks’ pale ale.

Routes North recommends: The Steamer, a smoky, malty ale with a nice copper colour. While it can sometimes be a little heavy on the carbonation, depending on the batch, it’s always a nice, refreshing drink that’s perfect for a warm day. 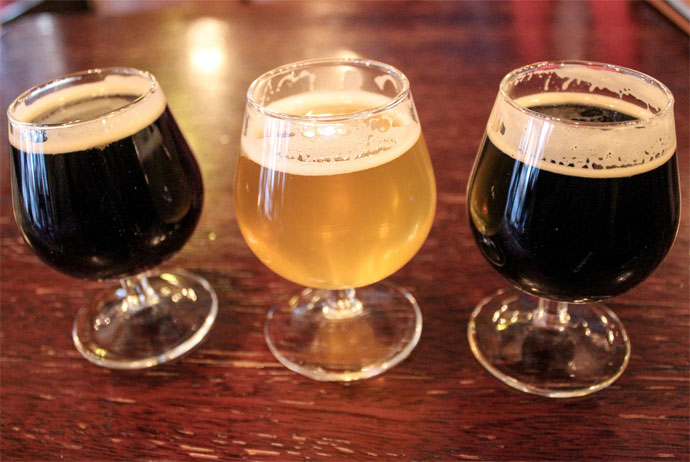 If you’re in downtown Oslo then swing by the Admundsen microbrewery. This fashionable restaurant and bar is centrally located just down the street from Oslo City Hall, and is very popular with the after-work crowd.

This is the flagship brewery of Amundsen, a growing beer producer which also runs Nydalen Bryggeri and lately opened a new brewing facility in the south-east corner of the city. Even with these ongoing expansions, the Amundsen Bryggeri & Spiseri (to give it its full name) still maintains its own unique drink selection by brewing many of its beers onsite; some of them aren’t available anywhere else.

The local pale ales and IPAs are always good, and there are usually several seasonal varieties to choose from. Chat with the bartender before ordering to find out which brews are currently on tap. 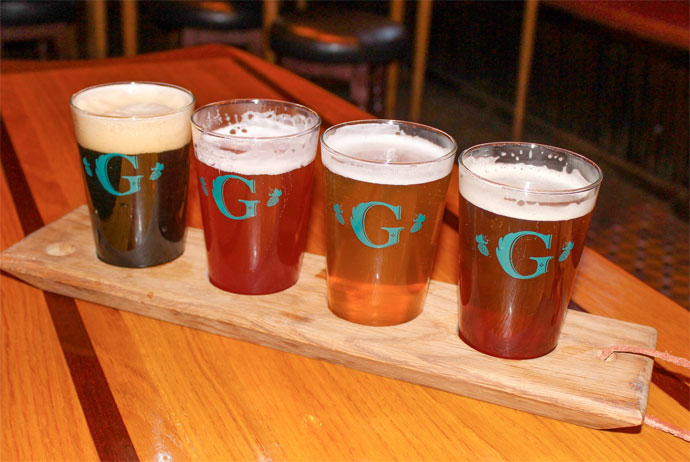 A cornerstone of the Grünerløkka bar scene, the Grünerløkka Brygghus has an excellent selection of microbrews. While there are no large fermentation tanks on display here, the actual brewing premises are located only a couple blocks away and the beers are carted over regularly, so you can still be sure that anything you try is fresh and local.

The brewhouse always has at least six of its own craft beers on tap, and they’re all worth trying. The Grünerløkka Pilser, Porter, and IPA are all classic and solid brews, while the seasonal offerings – ranging from nutty Christmas beers to more daring berry-inspired creations in summer and fall – are definitely worth a taste. If you can’t decide where to start, ask the bartender to set you up with a four-beer sampler for NOK 200.

Routes North recommends: Bjørnebær is Norwegian for ‘blackberry’, and the house’s Bjørnebær Saison is a Belgian-style saison with a sweet kick and, true to its name, a strong blackberry flavour. The yeast is constantly affecting the beer’s taste, so the brewhouse tries to serve it when it’s about three or four months old and the balance between sour and sweet flavours is just right. 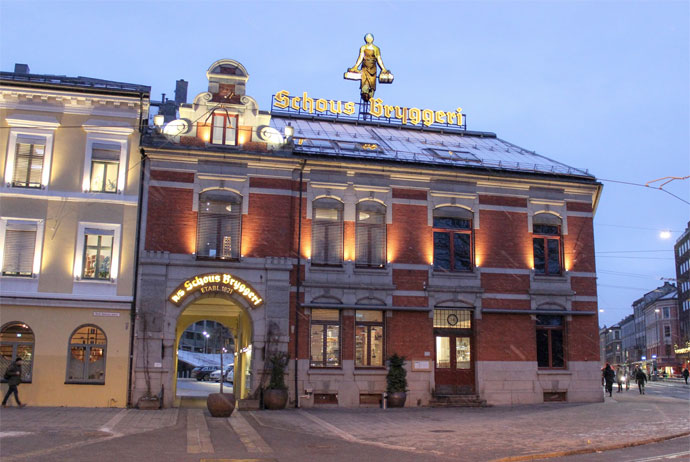 Schouskjelleren Mikrobryggeri is located in the cellar of the old brewery for the Schous beer company. Schous started operating here in 1873 and was in business for a little over a century. Though the brewery was shut down in 1981 and most of the surrounding area was remodelledinto a cultural center, the brewing tradition still lives on here, albeit underground.

The entrance to the microbrewery is tucked in a corner of the courtyard, with only a wooden door and small sign overhead indicating you’ve reached the spot. After stepping inside and descending a set of stairs, you’ll enter the cavernous interior of the cellar. With its barrel-vaulted ceiling, worn wooden furniture, and dark red brick walls you would be forgiven for thinking you’ve entered the bowels of a prison or monastery instead of a beer hall.

The atmosphere here is surprisingly cosy though, especially when the cellar is warmly lit in the winter months by the roaring fireplace at the far end. The bar staff are also quite friendly and are more than happy to chat about all the beers on offer.

Routes North recommends: Tigerstaden Saison, a pale ale with nice fruity and flowery flavours, topped off with a sweet finish. 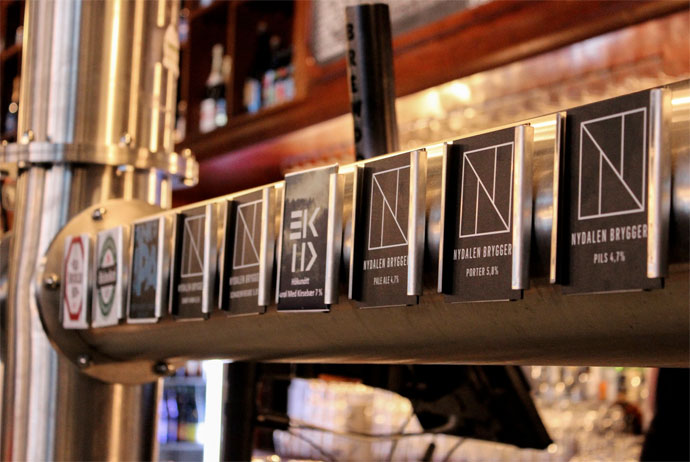 One of the newest additions to the city’s brewing scene is Nydalen Bryggeri and Spiseri, situated on the edge of the Aker River in the trendy northern neighborhood of Nydalen.

The brewery has a brick exterior harkening back to the area’s industrial heritage, while the sophisticated brown-and-tan interior offers a bit of old-timey elegance without being overbearing. The on-site brew facilities can be seen to the right as you enter, and are some of the largest production spaces of any brewpub in Oslo. Nydalen Bryggeri also offers a decent selection of food, including a tasty fish and chips dish that pairs perfectly with the beer.

Over the past few years the surrounding Nydalen neighborhood has exploded in popularity as the old mills and factories have given way to high-priced apartments and gleaming new business parks.

The brewery has subsequently become the go-to place for after-work drinks, and can get pretty busy in the evenings. On the weekends the crowds only get worse, so if you’re thinking of coming here on a Friday or Saturday night then be ready for a jam-packed bar and a seating area that’s reservation only.

Routes North recommends: The house porter, which is creamy and thick with rich notes of coffee and chocolate.

Map of brew pubs in Oslo

Getting from Copenhagen to Oslo

The epic train ride from Oslo to Bergen

50 free things to do in Oslo

The Oslo Pass: is it worth buying?

Guided tours worth trying in Oslo

Private Tour with a Local Guide in Oslo